The CPC consortium (cablex, Porr, Condotte/Cossi/LGV) has awarded COMLAB AG the contract for the radio coverage in the Ceneri Base Tunnel. According to Gotthard, the Ceneri Base Tunnel is currently the second largest part construction project for the NRLA. The tunnel, which is expected to open and commence commercial usage in 2020, runs from Camorino/Vigana in the north to Vezia near Lugano in the south and makes this north south connection on a flat trajectory which passes through the Alps.

The basic package includes an extremely complex tunnel radio system for the two 15.4 km long single-track tunnels, consisting of the digital redundant rail radio (GSM-R), the safety radio (POLYCOM) and optionally also the public mobile telecommunications systems (GSM and UMTS). As a result, train drivers and emergency services on the one hand, as well as train passengers on the other hand, will be supplied with mobile communications. “For this system solution, the highest priority is reliability,” says Niklaus Suter, head of implementation planning for the Ceneri Base Tunnel project at COMLAB AG. As a result of the thick layers of rock, no radio signals can be received inside a mountain. Despite this, rescue teams, the fire brigade and the police are reliant on being able to communicate fully with one another in the tunnel in the event of an emergency on the one hand, and on the other hand radio contact with the driver’s cab on the train must be guaranteed in real time. At these high speeds (up to 250 km/h) the train drivers can no longer see the signals in the tunnel, meaning that they have to be able to rely entirely on the train control system.

In order to be able to guarantee continuous coverage, the signals from the appropriate base stations are received in the railway infrastructure buildings at the tunnel portals, processed and routed inside via glass fibre cables, where they are boosted every 975 m by special tunnel radio repeaters and emitted via two leaky feeder cables in both tunnels. The system ensures high reliability through its design with multiple redundancies, whereby other system components automatically take over the operation in the event of a partial failure. “Communication can therefore be ensured even in the event of a fire in the tunnel,” explains Niklaus Suter.

With this system, last but not least, great importance is placed on the comfort of the rail travellers who can, as a result, make phone calls and surf the Internet at any time in the tunnel.

Along with the complex technology, the numerous interfaces with the emergency services, authorities, SBB [Swiss Federal Railways] and a variety of different telecommunications providers make the project a challenge. “It’s great that we can be assured of having long-term partners by our side in cablex and Elbatech,” says Niklaus Suter from COMLAB AG, pleased. 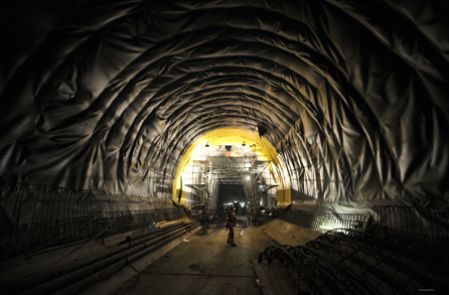